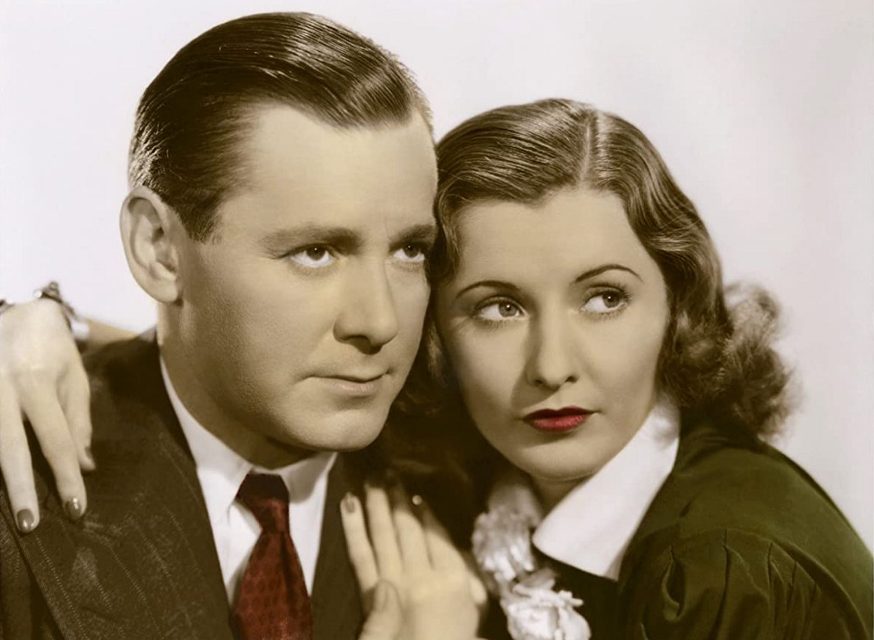 Offering us a great look backward, ‘Always Goodbye’ —  starring Barbara Stanwyck, a young and stunning Cesar Romero and two older men actors, one being Herbert Marshall, and the other Ian Hunter —  is a 1938 melodrama written by Edith Skouras (1911–2015) and Kathryn Scola from a story suggested by two men. If it is his story, the one who is always saying goodbye, the one who acts as her angel and with whom love and trust are built until…he says goodbye again…or if this is her story…or if this story were written to be remade today…

(Disclaimer: while the thinking is original, much of this text is gratis from Wikipedia and IMDb, with gratitude.)

What makes the melodrama so melo is exactly the hypocrisy that lies below the surface of the story…the lies below make it more mysterious…. drama is real. … In contrast, melodramas are overly-enhanced, overly-exaggerated, and often overly-sentimental and overly-emotional in the delivery of plot elements and character reactions. 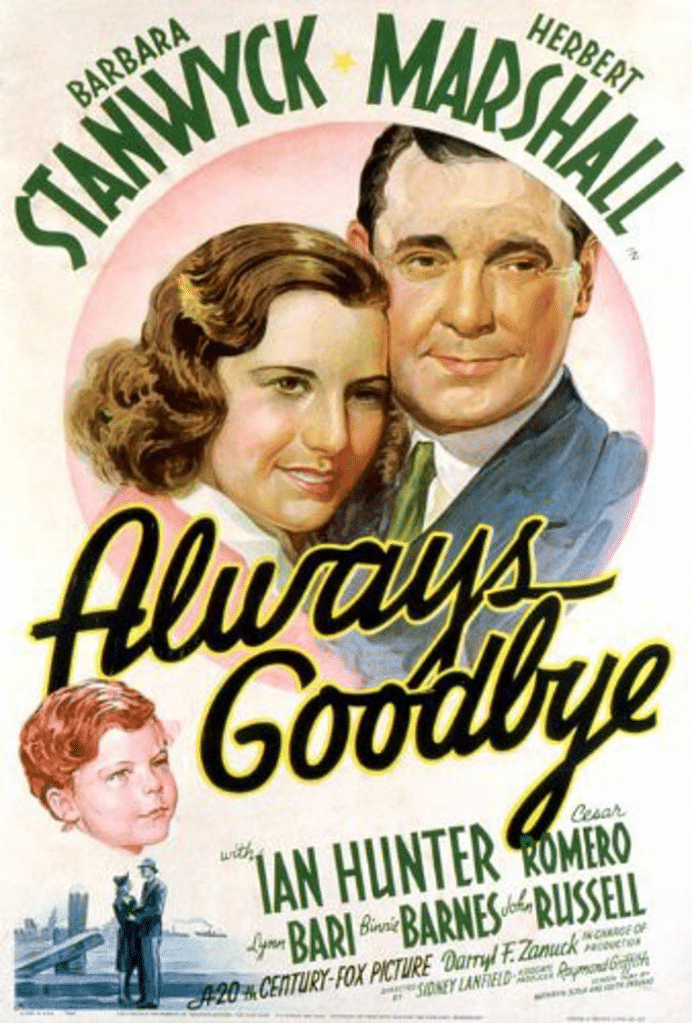 Logline: A woman must decide between two men — one she loves, the other she admires and respects.

Today this would be a different story.

What does the title of this film really mean?

Who is always saying goodbye?

If it is his story, the one who is always saying goodbye, the one who acts as her angel and with whom love and trust are built until…he says goodbye again…

If this story were written to be remade today, the new laws of Open Adoption would allow her to reveal the fact that she was the birth mother AND he, the angel, would reveal that he is homosexual and both could live openly loving one another, loving the child and loving the man she marries who had adopted her child with his now-deceased wife at the child’s birth five years earlier.

About adoption in the days when “open” adoption was not permitted and the Hayes code did not allow for sex, let alone illegitimate births resulting from sex to be even hinted at… So right away, Margot Weston is punished for having had sex before marriage because, as she is waiting for the man at city hall to get married, he is killed in a traffic accident. She, alone, decides to kill herself as well but is saved by some man sitting alone in the dark on the bridge who becomes her savior….This all happens in the first 20 minutes of the film.

The code sought not only to determine what could be portrayed on screen, but also to promote “traditional“ values (Whose tradition?). Sexual relations outside marriage — which were forbidden to be portrayed as attractive or beautiful — were to be presented in a way that would not arouse passion or make them seem permissible.[36] Any sexual act considered perverted, including any suggestion of same sex relationships, sex, or romance, was ruled out.[31]

So goes the storyline: Following the death of her fiancé as he was speeding to their wedding, Margot Weston is left pregnant and devastated. A former doctor, Jim Howard, helps the desperate Margot. When her son is born, Jim helps her find a home for the baby with Phil Marshall and his wife. Margot insists that neither the Marshalls nor the child can ever know that she is his mother. 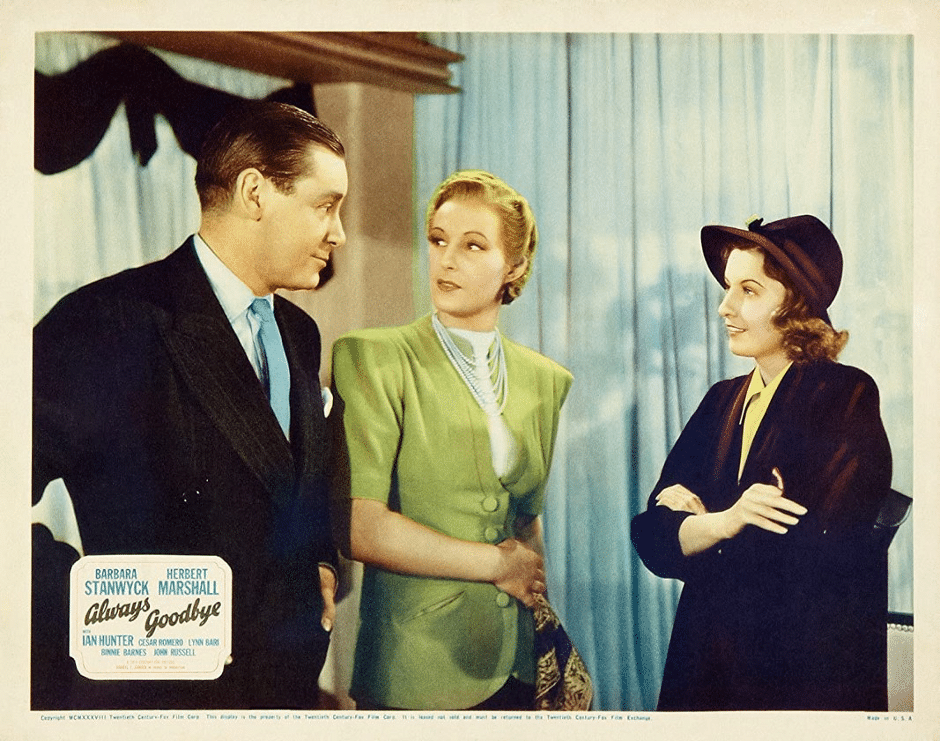 Five years later, while working as a well-paid buyer for couturier Harriet Martin, Margot meets Jim Howard again, and the two begin to fall in love. When Margot is sent to Europe on a business trip for Harriet, she meets and is wooed by the charming and carefree Count Giovanni Corini. While in Paris, she happens to meet her son, Roddy, who is traveling with his aunt who has been taking care of him since his adoptive mother died.

On the trip back to America, Margot and Roddy become close. Giovanni is also on the same ship, and he continues to pursue Margot. Back home, Margot becomes convinced that Jessica Reid, Phil’s new fiancée, does not love him, and would be a bad mother to Roddy. Margot decides to break up the engagement, though Jim, beginning a career as a scientist, reminds her of her earlier promise not to interfere in the boy’s life.

Phil overhears a conversation between Margot and Jessica which brings their engagement to an end. Meanwhile, Jim tries to ask Margot to marry him, but then Phil asks Margot to marry him for his and Roddy’s sake. Though Margot admits she loves Jim, he steps aside so that she can have a life with Roddy and Phil. 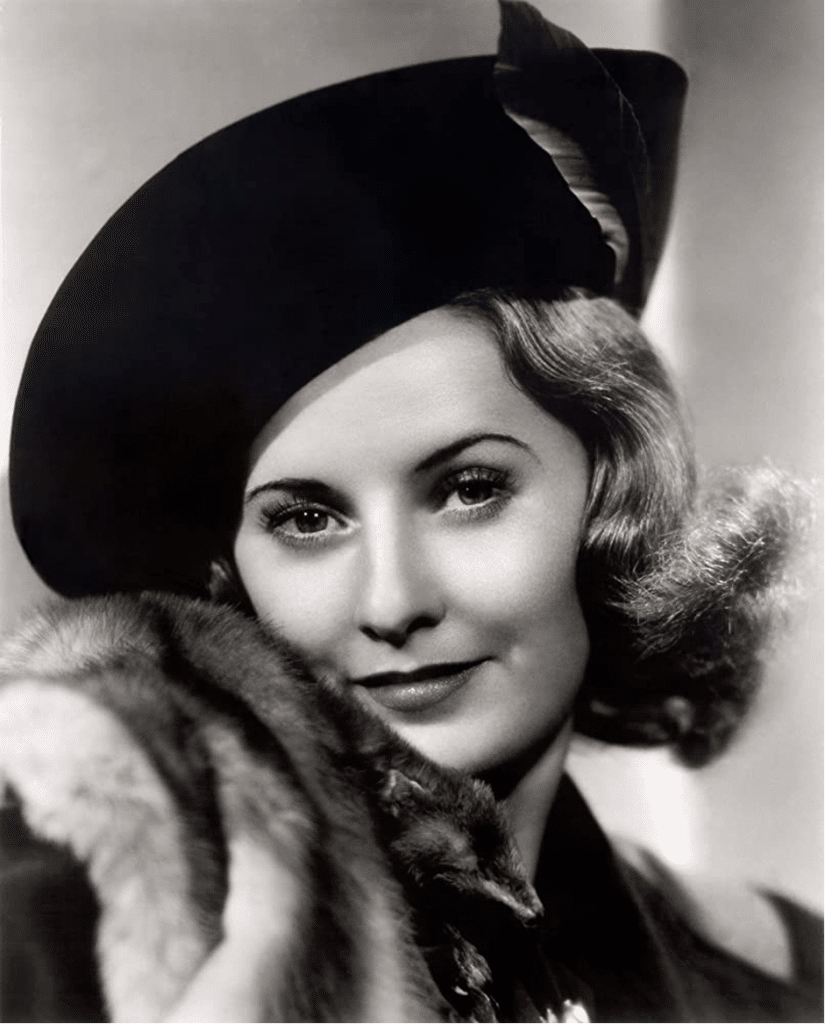 Aside from Hollywood being ruled from Washington D.C. in terms of censorship by the Hayes Code from the late 30s to through the 50s, another insight is how directors came into being during the first decades of cinema. The director, Sydney Lanfield, started as a jazz musician and a vaudeville entertainer when he was hired by Fox Film Corp. in 1926 as a gag writer and brought to Hollywood.

Making his debut as a director in 1930, he specialized in romances and light comedies, directing many of Bob Hope’s films in the 1930s and 1940s. One of his most successful films, however, was also one of his most atypical: The Hound of the Baskervilles, a brooding, atmospheric thriller that introduced Basil Rathbone as Sherlock Holmes. Lanfield divided the rest of his career between 20th Century-Fox and Paramount; while none of his films were particularly memorable, they were well-crafted, solid entertainment. In the early 1950s he was one of the first major directors to turn to series television, and he ended his career there in the mid-’60s, directing episodes of, among others, McHale’s Navy and The Addams Family.

Who were the screenwriters, the woman, Edith Skouras and Kathryn Scola? Part of the answer gives us another insight into Hollywood in the 30s. Kathryn Scola was an American screenwriter, with a career spanning the 1930s and 1940s. She was born in Paterson, New Jersey on November 6, 1891. Her father was Giuseppe “Joseph” Scola (1859–1900), an Italian-American silk dyer. Her mother was Mary King (1871–1943), an Irish-American.

Scola started her screenwriting career in the era of Pre-Code Hollywood, and was known for writing controversial films. The highlights of her career were the films Baby Face (1933), about a female social climber who uses sex to advance her social status, Female (1933), about a businesswoman who attempts to seduce a male employee, and Midnight Mary (1933), about an impoverished and abused woman who turns to crime in search of financial security.

Following the strict enforcement of the Motion Picture Production Code from 1934 on-wards, Scola was forced to water down her subsequent scripts. In 1935, she scripted an adaptation of the crime novel “The Glass Key” (1931) by Dashiell Hammett. She then wrote scripts for multiple film genres, from romantic comedies to war dramas.

In 1949, Scola worked on the original script for a film noir, Caught, for the independent production company “The Enterprise Studios”. Her script was rejected by the censorship board for its “questionable material”. The studio fired her and eventually replaced her with fellow scriptwriter Arthur Laurents (1917–2011). This marked the end of Scola’s film career.

In 1956, Scola co-wrote the script for a teleplay called In Times Like These. It was produced and released as part of the anthology television series The 20th Century Fox Hour (1955–1957). It was her last credited work, before entering a long retirement.

– IMDb Mini Biography By: Dimos I

Edith Skouras’ father, Charles Skouras, was president of National Theaters Inc.; her uncle, George P. Skouras, was president of United Artist Theaters. Her other uncle Spyros Skouras, was President of 20th Century-Fox. The Skouras brothers emigrated from Greece to St. Louis in the early 1900s. They were the sons of a poor sheepherder from Skourohorion, Greece. They saved their money working as busboys and bartenders in downtown hotels, so that by 1914, they were able to invest in a nickelodeon theater in St. Louis. This initial property was named the Olympia and was quickly followed by the acquisition of other theaters. They owned 30 local theaters by 1924. 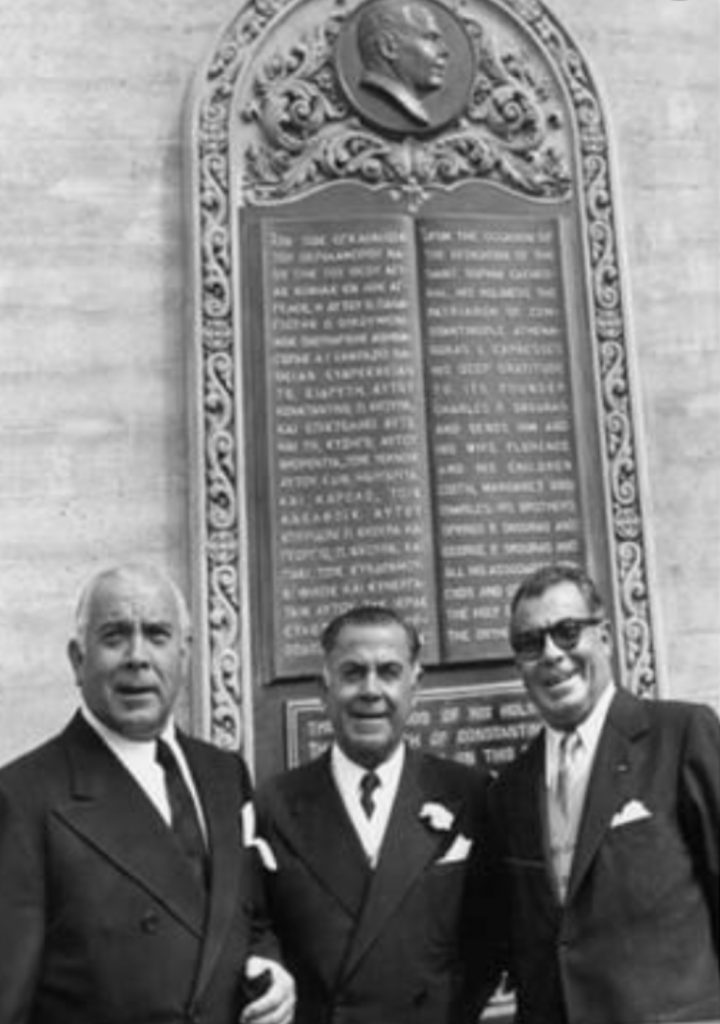 Five years later, they sold out to Warner Brothers and moved to the west coast. Between 1930 and 1932, Spyros(photo right) worked with Paramount, but left to save the Fox Metropolitan chain from its demise. In 1932, the Skouras Brothers took over the management of over 500 Fox-West Coast theaters.

During the 1930s, Spyros played a significant role in the merger between Fox and 20th Century Pictures. He was appointed president of the new company 20th Century Fox in 1942, and with the assistance of Darryl Zanuck, turned it into one of Hollywood’s most powerful studios. He would serve as president for the next 20 years.

During Spyros’ tenure, he worked to rescue the faltering movie industry from television– its new competitor. 20th Century Fox’s famous advertising slogan, “Movies are Better than Ever”, gained credibility in 1953 when Spyros introduced CinemaScope in the studio’s groundbreaking feature film The Robe. The CinemaScope process of wide-screen projection started a new, yet short-lived trend in colorful epic films.

Charles Skouras went on to become president of National Theaters which at the time owned 650 theaters across the nation. Giving back to the Greek community, Charles built the Saint Sophia Cathedral in Los Angeles which opened in 1952, a beautiful Greek church that still stands to this day in a part of L.A. now called the Byzantium Latino Quarter, named Byzantium in honor of the Cathedral and Latino in honor of the people living there today. He died two years later at the age of 65. 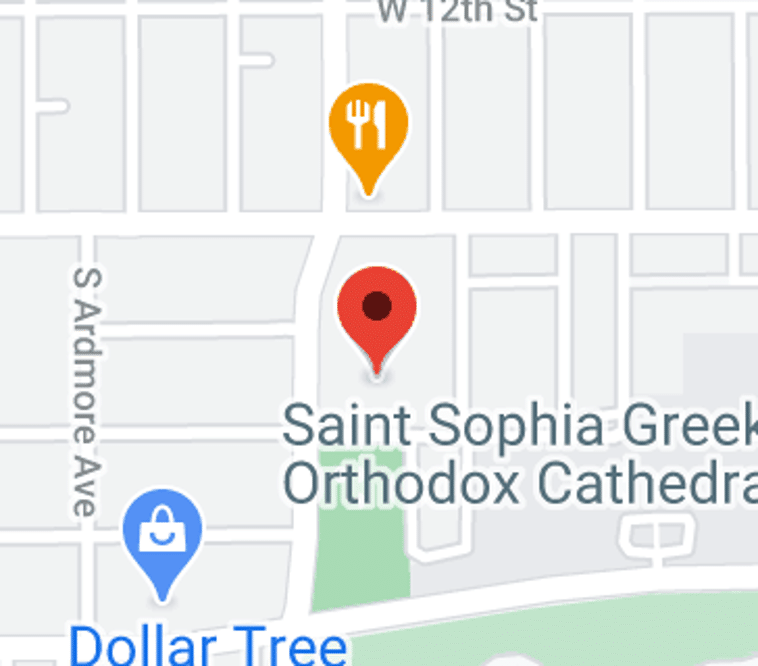 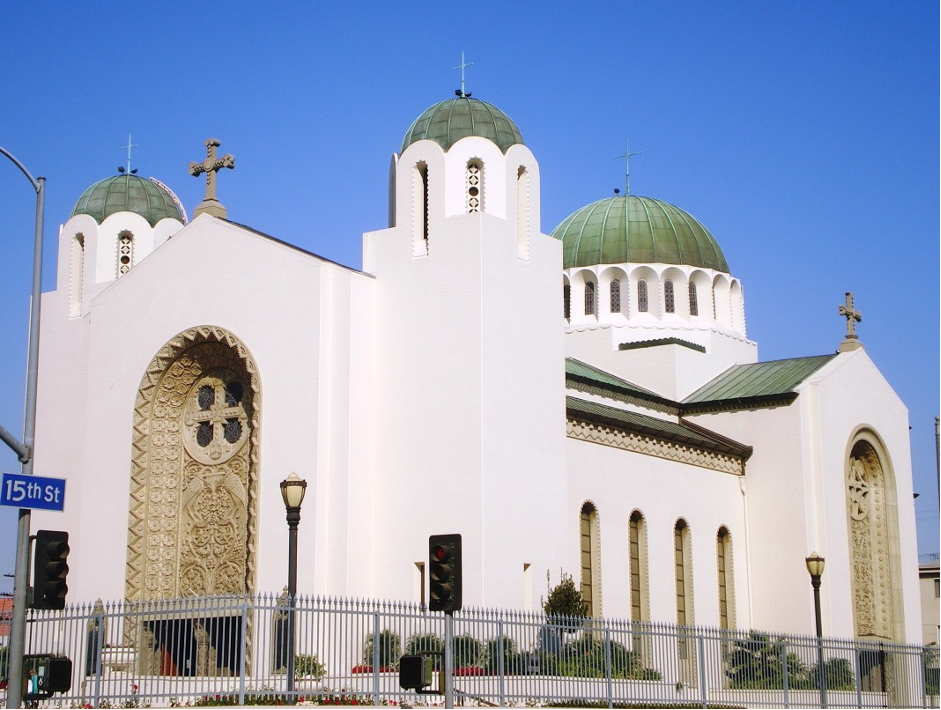 During World War II, Spyros was head of the Greek War Relief Agency. Spyros was known throughout Hollywood to have a thick, Greek accent. Bob Hope said: “Spyros has been here twenty years but he still sounds as if he’s coming next week.”

During his reign as president of 20th Century Fox, Spyros oversaw the production of many successful movies. However, his tenure ended in 1962 after the disastrous overspending on the budget of Cleopatra, the epic starring Rex Harrison, Elizabeth Taylor, and Richard Burton. The film was originally budgeted for $2 million, but was made at a cost of $44 million. Widely regarded as one of the biggest flops of all time, the film’s box office failure almost bankrupted 20th Century Fox, and Skouras was blamed for the fiasco. He was replaced by Daryl Zanuck .

As a result, Spyros was re-assigned to the position of board chairman and his control over films was largely taken away. In 1969, he left 20th Century Fox to nurture his other investments which included his own shipping line. He died in 1971 at the age of 78.

Ironically, Cleopatra recouped its investment after several years from box office receipts and television sales. Yet it still remains the most expensive film ever made (adjusting for inflation). 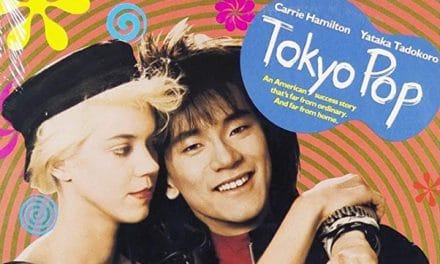 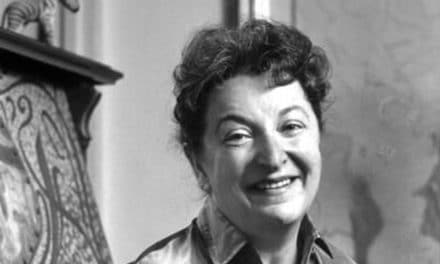